The Tableau Form: methodology and composition 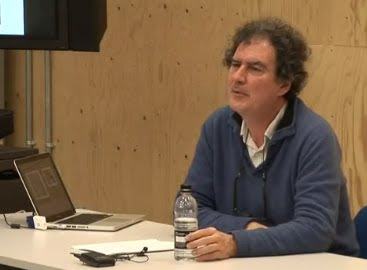 For many years Jean François Chevrier’s writing and curatorial work has occupied an important discursive position in relation to artistic practice and literature and in particular in terms of photography, historically as well as in relation to contemporary practices. Since 1988 he has been a professor at the École nationale supérieure des Beaux-Arts in Paris. Among his recent publications is a monograph on Jeff Wall (2006) and seven volumes of collected writings to be published by L’Arachnéen between 2010 - 2013.

He presented a paper as part of the Tableau: Painting Photo Object conference (which was a collaboration between CSM and Tate Modern) that took place on Friday 28 and Saturday 29 October 2011. As preparation for this paper gave a 3 day seminar in the School of Art at CSM. This reflects his belief that pedagogy is a fundamental and active aspect of his research methodology.

The seminar was composed of 3 distinct sections:

1. A session that discussed the idea of tableau form in terms of questions of composition.

2. A session entitled methodology exploring the underlying logic of the seminars in terms of ‘empirical method’.

3. A session that discussed student works in the studios.

The seminar cycle took take place over 3 days in the following configuration: